Back in March, my husband and I traveled south to Alpine, California, in the San Diego Mountains, for an afternoon flying birds of prey. We purchased a private raptor experience through Sky Falconry, apparently one of the few places in the U.S. licensed for such an activity. We were here to learn all we could about birds of prey and get to experience flying a falcon and a hawk.

After an extremely bumpy ride on the dirt road to their property, we met Kirk and Denise and they soon brought out three birds – a Lanner Falcon and two Harris’s Hawks. The Lanner Falcon was a juvenile male, just under two years old, and weighed 0.5kg. His name was Ali Baba. The larger Harris’s Hawk was a female, weighing 1kg, and the smaller male weighed 0.75kg. The female’s name was Steam.

To begin, we received an excellent lesson in all things falconry, learning that falconry as a hunting technique is over 10,000 years old, that these birds’ vision is excellent – Kirk and Denise used the charming analogy that these birds have such good eyesight that they could read a book three miles away – but that their bird brains mean that if something is out of sight, it’s out of mind. We also learned that their powerful talons have ratcheting tendons to grip with 200kg of strength – compared to a human male’s puny 40kg – and that the birds can only be trained with positive reinforcement: they will trade you something but won’t give it up otherwise.

Our first exercise was to learn how to use the leather glove that is very necessary when you want one of these birds to fly to your hand. Then the first flight with Ali Baba began.

Since the Lanner is not native to the U.S. it needs a GPS tracker when in free flight. Once the bird was kitted out with this tracker, a piece of meat (quail) was put on my husband’s glove and Ali Baba flew to it. Denise snapped a bunch of photos with my camera but very quickly the falcon was off, over the trees and down the canyon.

Mild panic set in as Denise explained that a previous time Ali Baba did this, it took them half a day to find and retrieve him. We watched his path tracked by GPS on the phone and we saw he was very quickly several miles away. Kirk said he was looking for thermals so he could rise, and after about 15 minutes he apparently found one. Ever so slowly he started heading back towards us (the bird has no homing instinct) and eventually was high enough that he could see us.

We scanned the sky and thought we spotted him, but it turned out we’d actually seen a Red Tailed Hawk. We finally spotted Ali Baba a few moments later: he was about 100 ft above the hawk, preparing to attack. He quickly went into a screaming dive towards the hawk before breaking off (perhaps realizing how much bigger it was than he) and heading our way. Kirk was swinging the lure around in a fast arc and shouting “Ho! Ho! Ho!” (the bird signal for “big food”) and Ali Baba came racing into us – doing a flyby and experimental grab of the lure before zooming off, banking and coming back. He grabbed the lure and Kirk and Denise were able to bribe him with some food to get it from him.

We saw on the GPS track that in 23 minutes he had traveled nearly 7 miles and his top speed was 75 mph!

Meanwhile the two other Hawks, in their boxes, were going crazy with the excitement because they could hear the call for big food. When Kirk got out the female Harris’s it was making a noise that sounded like an impression of a dragon – a throaty deep hiss/growl. Eventually she calmed down and we were able fly her. 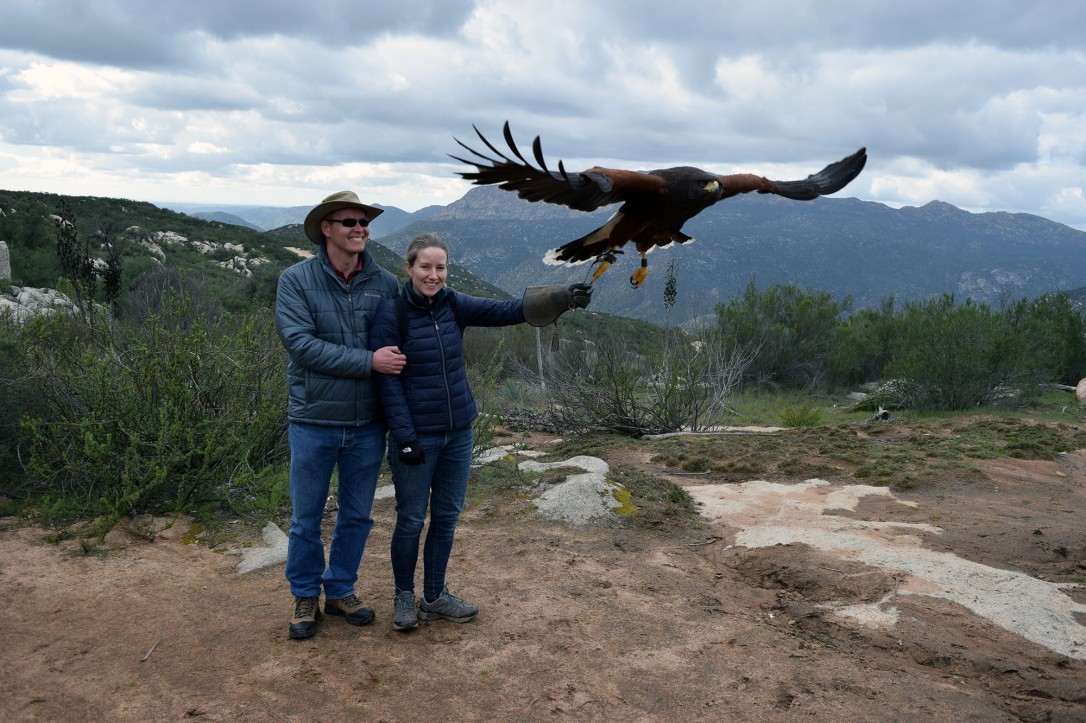 Steam was very heavy when she was sitting on my arm at full stretch, but extremely beautiful close up. We learned more about how they fly. They are the masters of minimum effort – when they fly to a target their eyes are locked on, and they stay close the ground (less than a wingspan) for less turbulence and smoother flight. When they come to land, they fly up to your hand in a flared posture as a braking maneuver. It was fantastic to see Steam do this, as well as to fly through narrow gaps in the trees and to be so agile as to catch something out of the air.

When it came time for our experience to end, we flew Steam to the lure which she grabbed skillfully. This was our lesson in how a bird “mantles” – i.e. hides its food. Steam was doing this beautifully, and again, a tasty snack was deployed to retrieve the lure from her.

In our two hours or so with Kirk and Denise we learned so much – they are excellent teachers. We had an absolutely fantastic experience with Sky Falconry and would highly recommend it to anyone interested in birds of prey.

-By Amanda Kocz. This post originally appeared on Perpetually Expat.

The information contained in this site is provided for informational purposes only, and should not be construed as legal advice on any subject matter.